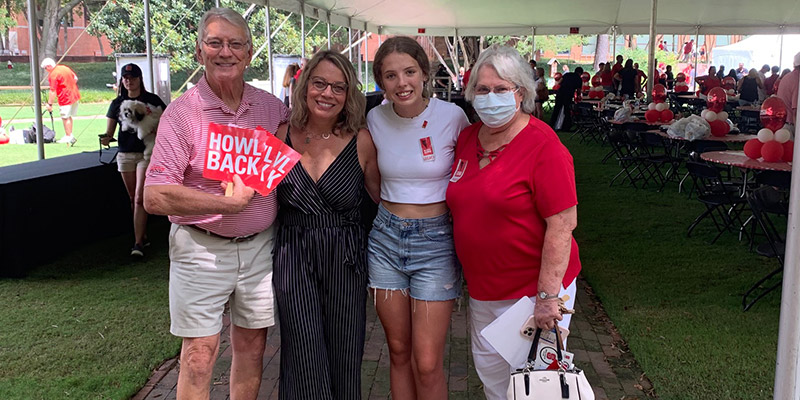 Our employees are among NC State’s most loyal supporters and advocates. We know that many of you cheer for our sports teams and let others know NC State offers some of the best academic programs anywhere. Some of you are so enthusiastic, you’re de facto recruiters. It could be argued no one knows this university better than you do. So it’s no surprise that some of our employees’ children end up attending NC State.

To celebrate the start of the school year, we’re telling the stories of some employees and their children who started their freshman year at NC State last week. The students share why they chose NC State, and their parents discuss how proud they are that their children joined the Pack.

Carsyn Gilmore is a student at NC State because she wanted to continue her family’s legacy at the university. 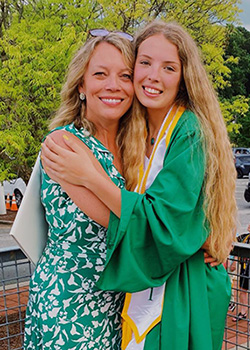 Jennifer Gilmore (left) is director of marketing and communication for Campus Enterprises, and her daughter, Carsyn Gilmore (right) is a freshman at NC State. Jennifer Gilmore, an NC State graduate, is proud that her daughter is continuing the family legacy of attending NC State.

Her grandfather, Charles Holland, is a 1966 graduate of NC State, and her grandmother, Judy Holland, worked at Holladay Hall for two years to help pay her husband’s tuition.

Gilmore’s mother, Jennifer Gilmore, also is an alum who graduated in 1990, and she has been an employee of NC State since 2008. She is the director of marketing and communication for Campus Enterprises. In all, Carsyn Gilmore has 11 close family members — including her father, Ron Gilmore — who are graduates of the university.

“I’ve grown up on NC State’s campus, so it is fitting for me to go here,” said Carsyn Gilmore, who is in the Exploratory Studies program. “I love NC State, so I thought it would be really cool to go to school here with the history that my family has here.”

Carsyn Gilmore’s earliest memories of NC State are as a child, when her grandfather drove his RV to football games and her family tailgated. She also has fond memories of hanging out in her mother’s office on campus and going to Packapoolza and dining hall events.

Since Carsyn Gilmore was a child, she had her sights set on attending NC State — except for middle school, when she thought she might want to go somewhere else. She said she later realized no other school she considered could measure up to NC State.

“I know a lot of people who go to NC State, and the Exploratory Studies program is the perfect fit for me because I don’t know yet what I want to do career-wise,” she said. “No other school that I applied to has that kind of program.”

Her decision to attend NC State has her family bursting with pride.

“For me, there is a secret joy in having her here and sharing that NC State experience with her,” Jennifer Gilmore said. “I know that her granddad is especially excited. She’s the youngest of the five grandchildren and was our last hope to go to NC State.”

‘This Is Pretty Special for a Mom’

When Grace Mullins decided where she wanted to attend college, she picked NC State because of its award-winning Exploratory Studies program, and because it’s close to home. 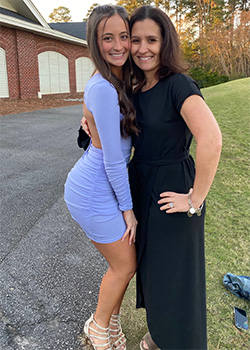 Grace Mullins (left) is a freshman at NC State, and her mother, Tara Mullins, (right) is the director of the NC State Dance Program. Grace Mullins said one of the reasons she decided to attend NC State is she wants to remain close to her mother and brothers.

Mullins enrolled in the Exploratory Studies program because she isn’t sure what career path she wants to explore. She said she’s eager to see what the program offers because when she discussed it with other people, they raved about it.

No one is prouder of Mullins’ decision to attend NC State than her mother, Tara Mullins, director of the Dance Program at NC State.

“I love it here,” said Tara Mullins, who has worked at NC State for 10 years. “Everybody says it’s a STEM university, and I do understand that to a certain extent, but it really embraces the arts.”

Tara Mullins said her daughter is a well-rounded student and a strong leader, and she can’t wait to see the opportunities she’ll take advantage of at NC State.

“She worked her butt off to get to where she is, and that really makes me excited and proud,” Tara Mullins said. “Knowing what’s ahead of her at a university like this is pretty special for a mom.”

What Are You Looking Forward to this Fall Semester?

Why NC State’s Recognition Program Is Called Our Extraordinary Pack