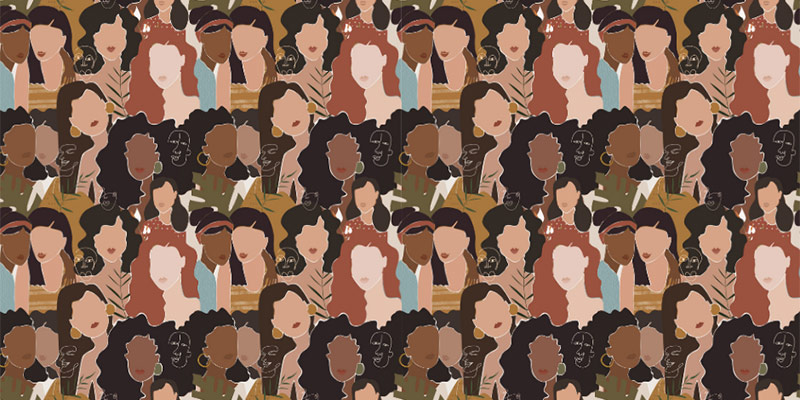 Natalie Bullock wants to make documentaries highlighting Black women and the issues that affect them. Pam Gerace fights for sexual assault and domestic violence victims. Donna Petherbridge is a champion for women who work in technology positions.

All of these outstanding women work at NC State. For Women’s History Month, we are highlighting them and several other women who are members of the Wolfpack. Although we could only spotlight a few women in this newsletter, we are proud of all the phenomenal women at NC State — students, staff and faculty — and their immense contributions to this university. We are honored to salute each of you this month.

Below are mini-profiles of the women mentioned above, along with six other women. You will learn about their careers, what motivates them and how they try to help other women be just as successful as they are. 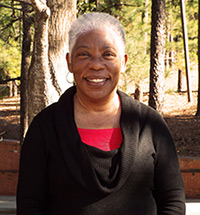 Ada Baldwin uses the trials she has faced in life, and her successes, to encourage others. Baldwin earned a bachelor’s degree in communication at Virginia Tech and a master’s degree in business management at Central Michigan University. She also served in the Air Force for four years. When she was experiencing a low point in her personal life, she was offered an opportunity that changed her and her daughters’ lives. She initially turned down that opportunity — to be the director of Facility Services at the University of North Carolina at Greensboro — until her daughters urged her to pursue the job. “I thought, if this is how I’m going to take care of my daughters, protect them and survive, then nothing is going to stop me,” she said. Baldwin landed the position and held it for 12 years. In 2012, she became the director of housekeeping at NC State, where she is responsible for a staff of about 300. “I mentor young women sometimes, and when they hear my story, they say, ‘How did you do all this?’” Baldwin said. 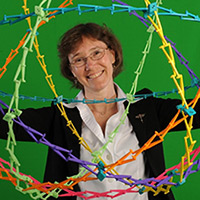 The national average for the percentage of women enrolled at colleges of engineering has been holding steady at roughly 20% for at least the past 40 years. At NC State, however, 28% of the more than 6,000 students studying engineering are women. NC State has surpassed the national average due in part to the efforts of Laura Bottomley. When Bottomley came to NC State in 1998, she started Women in Engineering to encourage women to study engineering at NC State. “I do think the reasons are directly related to our program and the fact that all of Engineering Academic Affairs has worked with us to make it happen,” Bottomley said. She hopes the College of Engineering’s next incoming class will consist of 33% women. Bottomley has been trying to dismantle the barriers that prevent women from pursuing engineering careers since the mid-1980s, when she worked at AT&T Bell Labs. Her efforts at NC State to persuade more women to pursue careers in engineering resulted in Bottomley receiving a prestigious honor in 2007: the Presidential Award for Excellence in Science and Engineering Mentoring. In 2015, the Women in Engineering program merged with a College of Engineering program focused on recruiting minority students to form the Women and Minorities in Engineering Program. The program works to recruit and retain a diverse set of students to study engineering at NC State. 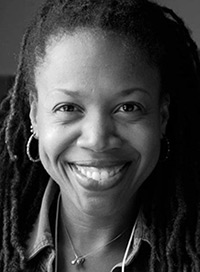 If you ask Natalie Bullock Brown about the type of documentaries she wants to make, you will notice a theme: The films are about Black women. “I’m really interested in films about Black women because we don’t necessarily get the sort of attention and analysis I think we require and deserve,” she said. For the past five years, Brown has been trying to get financial support for baartman, beyoncé & me, a film that explores the impact our culture’s beauty standards have on Black women and girls. She also hopes to create documentaries about journalist Ida B. Wells and how stereotypes continue to affect Black women. “My experiences as a Black woman fuel and feed what I am interested in documenting in documentary film,” Brown said. Brown’s ambition to become a documentary filmmaker started at Howard University, where she earned a Master of Fine Arts. Her goal is to illuminate issues for Black women and present them in a way that will be transformative. “There’s a lot I wish I had known, which would have helped me to navigate my life in a way I think would have been more supportive of the type of person I wanted to become and that I believe I am becoming,” Brown said. She continued: “I want young Black women to have the opportunity to do some of the refining of their worldview much earlier than I did.” 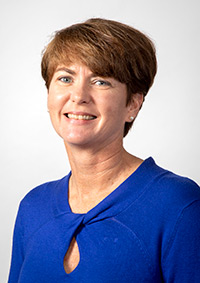 In 2019, Beth Burchell was part of an all-female team that organized and led the “Women in Agriculture — Grow Deep, Grow Strong” workshop. Twenty-three women attended the two-day session for women interested in agriculture and agriculture-related careers or already working in the industry. Burchell said women can play any role they choose in agriculture — from operating farms, greenhouses and farmers markets to being research scientists — and she and the other organizers of the workshop want to help women build the skills and confidence they need to do so. “We realized there are a lot of women who would like to play more of an active role in their family’s farm or branch out on their own,” Burchell said. “We want to provide a comfortable place for them to gain knowledge and skills to get more involved in agriculture.” The workshop offered classroom sessions on subjects ranging from beef quality assurance to legal topics. The women also participated in hands-on farm-related activities, like driving a tractor. The workshop organizers are planning to host another workshop in September. 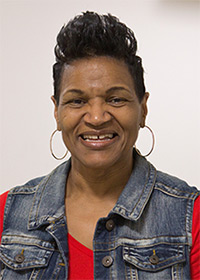 In July 2020, Pat Gaddy was elected chairperson of the Staff Senate. For Gaddy, who celebrated her 30th anniversary at NC State in January, her election to the leadership position was a significant accomplishment. “I know that many times it’s always the men that are the leaders,” she said. “It was important to me as a woman not only to be a member of the Staff Senate but also to be in leadership — to be the chair.” Gaddy hopes her career path at NC State and her role as campus leader motivates others. Gaddy’s first job at NC State was as a dry cleaner. “You can be anything that you want to be as long as you have the desire and stay motivated and encouraged,” she said. Gaddy has been involved in Staff Senate off and on since it was launched in 1995. She said she joined to be a voice for those who don’t feel empowered to speak up. “Just recently someone shared with me that my enthusiasm has really inspired her to one day be chair of the Staff Senate,” Gaddy said. 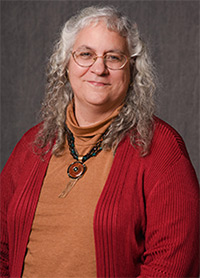 Pam Gerace doesn’t think of herself as an advocate for victims of sexual assault and domestic violence. Nevertheless, she has been fighting for domestic violence victims since the 1980s; she participates in advocacy groups for victims of sexual assault and domestic violence; and she helped establish a sexual violence phone line at NC State. “I guess you could look at it that way,” she said of being an advocate. “I don’t think of it that way. It has been a huge part of what I’ve done in my legal career.” Gerace came to NC State in 1987 to start Student Legal Services, which provides legal services to students. That office, which consists of Gerace and three other attorneys, handles an array of legal matters for students — from consumer and landlord-tenant issues to filing restraining orders for students who have been victims of violence. “I could never picture doing contract or corporate work or anything like that,” Gerace said. “With the types of cases that I handle, I can see the impact I’m having on people. Those are the kinds of cases that I enjoy, which is the whole reason I went into legal aid.” 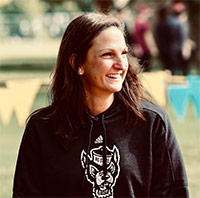 When cross-country and track and field champion Laurie Henes graduated from NC State in 1991, she wanted to pursue a career in sports administration. Henes became a graduate assistant in the Department of Athletics at NC State and a professional runner. Her time as a graduate assistant inspired her to change her mind and pursue a different career path: coaching. “I decided I wanted to have more day-to-day interaction with student-athletes than would be possible in administration,” she said. In 1996, Henes landed her first coaching job, becoming a full-time assistant at NC State. After Henes became a coach, she started to pay more attention to how many women’s sports teams were coached by men. Those men were great coaches, but Henes said she believes it is important for female college athletes to have female coaches who can serve as their mentors and role models and show them a career in coaching is possible. Henes strives to be like her high school coach and role model, Denise Gorski, who was a matron of honor in Henes’ wedding and is her child’s godmother. “I think a lot of young women just need to know that people believe in them, and they can do the things they don’t think are possible,” Henes said. 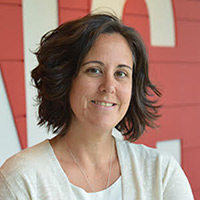 Lisa LaBarbera-Mascote has been involved in women’s advocacy ever since she was a college student. She was inspired by a speak-out event she attended at Stony Brook University, where she heard women describe being survivors of sexual violence. “Ninety-five percent of the people that I loved and cared about at that time shared an experience about sexual violence,” LaBarbera-Mascote said. Hearing the stories the women told that day at Stony Brook led LaBarbera-Mascote to join the Center for Women’s Concerns, a student organization at Stony Brook, and to remain involved in efforts to educate the public and curb sexual violence during her time as a graduate student and throughout her professional career. LaBarbera-Mascote came to NC State in 2005 to be an assistant director in University Housing, but soon after she arrived, she got involved in volunteer efforts at the Women’s Center. She became the center’s director about five years ago. “There’s a thread throughout my entire career, but if you had asked me if I’d be the director of a women’s center, I probably would have said, ‘No.’ Yet here I am, exactly where I need to be, doing the work I’m called to do right at this moment.” 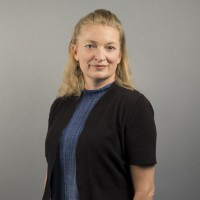 Donna Petherbridge loves to empower and uplift others. “It doesn’t tarnish your crown to make somebody else’s shine brighter,” she said. As a result of that belief, Petherbridge has become a champion for women at NC State. In 2019, she and five female colleagues founded a group called Women in Technology. The group supports women who work in technology positions at NC State, offers them networking opportunities and encourages them to seek leadership positions. The group of more than 100 women and a few men meets monthly. Membership ranges from women just beginning their careers in technology to those who have ascended to leadership roles in the field. “It is so wonderful to put women in really high-level leadership positions in a room with people who are just starting out in their careers so early-career folks can see what they can be,” Petherbridge said. Petherbridge also is a former chairperson of the Council on the Status of Women at NC State. She served on a council-formed work group that advocated for the paid parental leave policy approved by the University of North Carolina System Board of Governors in 2019. “I just teared up when the board passed the policy, because I remember how hard it was to have a child and then feel pressure to go back to work,” Petherbridge said.