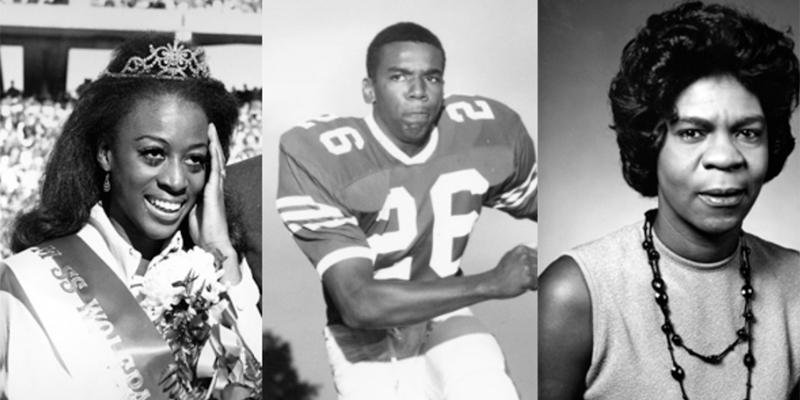 Every February, NC State proudly celebrates African Americans for their immense contributions — especially those who have contributed to the university’s history. You can read about African Americans who have played a vital role at NC State by following an extensive timeline on the NC State University Libraries website. Below we profile two of the people on that timeline. 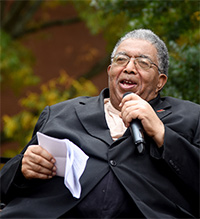 Beginning with his time as a student at NC State and continuing through his professional career, Irwin Homes blazed a trail that opened doors for African Americans.

Holmes is known for being one of the four barrier-breaking students who, in 1956, became the first Black undergraduates to enroll at NC State. As a student-athlete, Holmes broke even more barriers: He was the first Black athlete in the Atlantic Coast Conference, the first Black varsity letter winner and the first Black co-captain of a varsity team. He also is proud of his induction into Eta Kappa Nu, the national Electrical Engineering Honor Society.

In 1960, he earned a bachelor’s degree in electrical engineering and became the first Black student to receive an undergraduate degree from NC State.

“It’s really special in the growth of Black achievement in America, Black opportunities in America and how far we’ve come,” Holmes said of being the first Black student to earn an undergraduate degree at NC State. “But it also shows how far we still have to go. We are a long way away from where we should be.”

The civil rights movement was in its infancy when Holmes and the other Black undergraduates started attending NC State, helping to open a door of opportunity for generations of Black students to come.

“I was just a person who was in the right place at the right time,” said Holmes, who is retired and lives in Durham. “That’s the big difference. There is nothing special about me compared to lots of other kids who could have done just as well or better.”

It’s really special in the growth of Black achievement in America, Black opportunities in America and how far we’ve come.

After Holmes graduated from NC State, he had a long and distinguished career in engineering, including a stint of 20-plus years at IBM. His career highlights include working on teams that created the first color television and later laid the groundwork for the internet.

Holmes acknowledges that despite his groundbreaking accomplishments and those of many other Black people who are celebrated this month, equality for all remains a struggle in this country. That issue was put under the spotlight last summer after the death of George Floyd in Minnesota. Floyd’s death sparked Black Lives Matter marches across the country.

“First of all, it’s very sad in a lot of ways because what we’ve seen through all these things going on is that the racism that I knew of growing up as a kid still exists in this country in large, large numbers of people,” Holmes said. “On the good side, we have never had this many white people go out and march and show their support for us.” 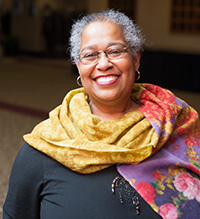 When Toni Thorpe worked at NC State, the two things she loved most about her time here were the students she got to mentor and exposing them to Black culture.

Thorpe worked at NC State from 1991 until she retired in 2017. During that time, she developed strong bonds with a plethora of students who called her Mama Thorpe. She also created innovative programming for those students and the university community.

“The first thing that comes to mind when I think of my career is the students,” Thorpe said. “To hear from students and be invited to their weddings, baby showers and graduations means a lot to me.”

Thorpe started her NC State career at Center Stage, now called NC State LIVE. In 2001, she joined the African American Cultural Center as its office manager. After Thorpe joined the AACC, she convinced its director that the center needed a program coordinator to promote and enhance the AACC’s mission. Thorpe turned out to be the perfect person for the job.

She created programming such as NC State’s Martin Luther King Jr. commemoration, Blacks in Wax and the Red, White and Black Walk, all of which turned into successful, must-attend events.

“I was very blessed to have people that believed in my ideas and supported them campuswide,” Thorpe said.

The Red, White and Black Walk is a guided tour of campus that highlights the spaces and places that are significant to the African American experience at NC State.

“I wanted to create something that told the story of the African American walk at NC state from its beginning,” Thorpe said.

For Blacks in Wax, held each year during Black History Month, the Witherspoon Center is turned into a live museum. Students dress as well-known African Americans and pose as if they are mannequins. They each wear a faux button on their clothes that visitors press, prompting the students to describe the person they are portraying.

I was very blessed to have people that believed in my ideas and supported them campuswide.

Throughout the years, students have portrayed a variety of Black people, from icons like Thurgood Marshall, the first Black justice on the U.S. Supreme Court, to Sandra Bland, a Black woman whose death made national news in 2015 after she was found hanging in a jail cell in Texas.

“I really enjoyed creating Blacks in Wax because I think it’s important to understand the triplets — the past, the present and the future — and how they’re all tightly woven,” Thorpe said.

When Thorpe arrived at the Witherspoon Center for Blacks in Wax in 2017, student Aaliyah Robinson was dressed as Thorpe.

“When I walked up to her, she was in an outfit similar to what I would wear,” Thorpe said. “That was one of my greatest tributes. I cried. I could not move. It was just such an honor.”