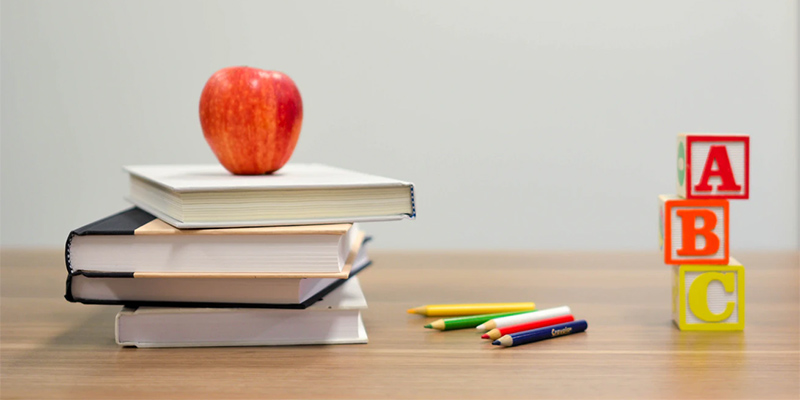 Since mid-August, eight elementary school students and a former teacher have been meeting in Joe and Katherine White’s basement.

The students — the Whites’ three children and the children of friends — spend most of their day in virtual school. They log into Google Meet on their laptops, listen as their teachers review lessons, and work on assignments throughout the day. The children’s grade levels range from kindergarten to fifth grade. 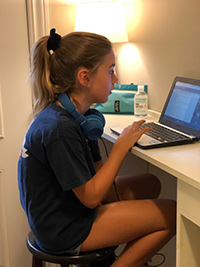 Lola White, 10, sits in front of a laptop at her home. She participates in a learning pod with seven other students, including her two siblings.

Like other parents in Wake County and across the country, the Whites are hosting a learning pod in their home. Learning pods are small groups of students who meet in person outside the classroom. Some parents hire tutors or former educators to teach their children, while others share the responsibility with other parents.

“The fundamental things that we’re trying to do is give our kids consistency and the best education that we can in this environment while prioritizing their health,” said Joe White, director of finance and business at NC State University Libraries. “I think it’s been really positive, and the kids get along for the most part.”

Parents have been opting to form learning pods for a variety of reasons related to the COVID-19 pandemic. Some are uncertain about whether it’s safe to send their children to school right now, and others don’t think virtual instruction is best for their children.

Why the Whites Formed a Learning Pod

For the past five years, Joe has worked at NC State University Libraries. His wife is deputy director at the North Carolina Museum of Art. The Whites are both former educators.

For the Whites, last spring proved to be a difficult time. The couple had to transition to working from home as a result of COVID-19, and at the same time, their children — Lola, 10, Hughes, 7, and Ward, 5 — switched from traditional in-school instruction to home-based virtual instruction. That meant the Whites had to juggle their work responsibilities and help their children with their schoolwork. 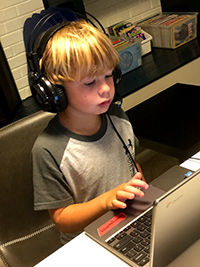 Ward White, 5, is the youngest of eight children taking part in a learning pod. His parents are hosting the learning pod in their home.

While on vacation last summer, the couple began to discuss how to ensure their children would have a productive and consistent educational experience when school resumed. That’s when they had the idea to hire a former teacher to help their children.

When the Whites discussed their idea, they had not heard of learning pods. Shortly after they settled on their plan, they started hearing about them on the news and noticed other parents trying to recruit teachers for learning pods through online platforms.

“We see the value of in-person education and how important that is for socialization for kids in general,” Joe White said. “Ideally, we would have liked for our children to have gone back to school, but we didn’t think they would be going back in any meaningful or consistent way. Once we talked through things and the idea came up, we quickly adopted it.”

How the Learning Pod Works

Gannon was a teacher from 1997 to 2018. Her specialty is project-based and inquiry learning. When she and the Whites crafted a plan for how the learning pod would operate, that plan envisioned the students being in virtual school half the day and spending the rest of the day doing enrichment projects with Gannon. 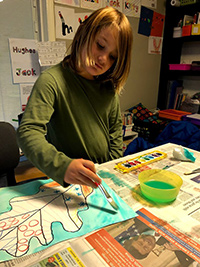 Hughes White, 7, who participates in a learning pod at his home, paints a picture. Hughes and his classmates in the learning pod get to do hands-on learning.

But the students are spending more time on their computers for school instruction than the Whites and Gannon anticipated. Gannon and the students have spent a few days — three half days and two full days — doing hands-on learning. They have painted, conducted science investigations and learned about sea turtles and dairy calves.

“I’ve been trying to find things to do that could unify us as a group,” Gannon said.

The five children who participate in the learning pod with the Whites’ children begin arriving at the Whites’ home at about 7:45 a.m. The students can stay until 5 p.m.

Gannon arrives at 8:15 a.m. and stays until 3:30 p.m. She gets a 90-minute lunch break/planning period. Katherine White monitors the children until Gannon arrives and when Gannon takes her break. Joe White usually keeps an eye on the students after Gannon leaves for the day. While the students play outside, Joe White sits at a nearby table with a computer and takes care of work responsibilities.

Before Gannon leaves, she briefs the Whites on how the day went. As part of her agreement with the Whites and the families of the other children participating in the learning pod, Gannon writes a formal assessment of each child once a quarter.

Has the Experience Been Beneficial?

Joe White said it has been interesting to see how the learning pod has evolved since it began in August.

“There’s a lot of difference in development and behavior with the kids, but they all help each other out,” he said. “There are some spats and things like that, but overall it’s cool to see them all interact, learn, play and grow. I think it has been great.”

Gannon said the experience, a first for her, has been quite interesting.

“I wouldn’t choose to do something like this long term,” she said. “I see it as kind of a temporary solution. It gives me an interesting glimpse into how all this plays out from the home side. I have all my teacher friends who can tell me about it from the school side.”

She said the experience has helped her see how learning pods can be beneficial to students and their parents.

“These kids need support, and these families need support,” Gannon said. “The kids really thrive during this time together. I didn’t see what things were like for them at the end of last school year when they were doing this away from each other. But I think that this opportunity for them to be away from their parents and have each other to play with and spend time together is really valuable.”

Doing Our Part to Protect the Pack