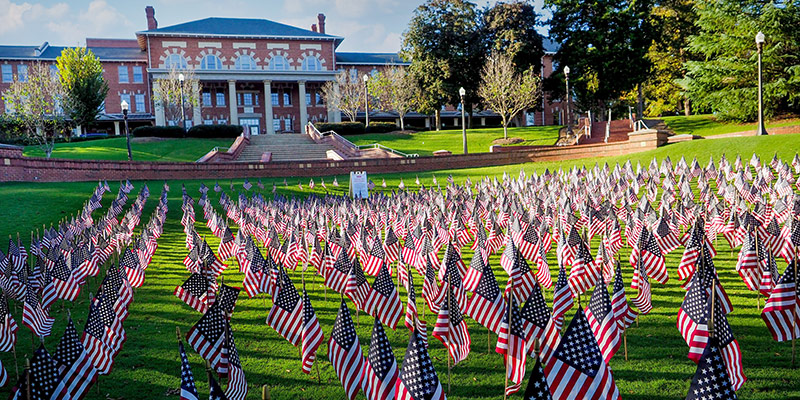 Volunteers planted nearly 1,200 flags in the ground in the Court of North Carolina earlier this month in honor of students and employees at NC State who are veterans.

Former Air Force Capt. Tina Nelson-Moss has been advocating for veterans at NC State since she began working for the university in 2008. In 2012, she pitched the idea to honor our veterans through a flag display.

Since 2012, NC State employees and students have gathered to plant a slew of American flags in the ground in the Court of North Carolina.

The display is about recognizing veterans, but it’s also about coming together as a team to do something special.

Tina Nelson-Moss, director of the Department of Risk Assessment, Division of Environmental Health and Public Safety

Earlier this month, the tradition continued when a group decorated the court with nearly 1,200 flags in honor of military veterans who are employees and students at NC State. The volunteers, who wore face coverings during their activities, took down the Salute to Veterans display Nov. 16.

Tina Nelson-Moss, director of the Department of Risk Assessment in the Division of Environmental Health and Public Safety, has been among the volunteers carefully and proudly sticking wooden flags in the ground for the display every year, except in 2015 when she was on maternity leave.

Nelson-Moss makes sure she participates in the project for two reasons: The Salute to Veterans was her idea, and she’s a veteran.

“The display is about recognizing veterans, but it’s also about coming together as a team to do something special,” she said.

Nelson-Moss served in the Air Force from 2003 to 2008, achieving the rank of captain. Her duties included running a domestic violence and child maltreatment program. In 2007, she deployed to Afghanistan, providing combat stress support to service members.

Nelson-Moss said several of her family members served in the military, and their service inspired her to follow in their footsteps.

“I always knew that I’d be a part of the military in some way,” she said. “Just after Sept. 11, when I found out there were opportunities for social workers in the military, I thought that was a sign for me to join.”

Nelson-Moss said the five years she spent in the Air Force was one of the best experiences of her life. 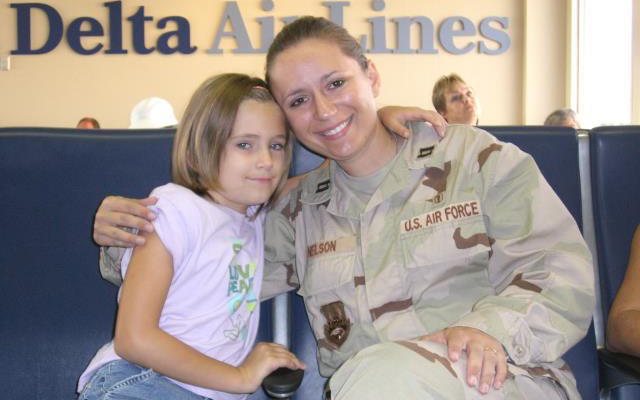 Tina Nelson-Moss, director of the Department of Risk Assessment at NC State, served in the Air Force from 2003 to 2008. Nelson-Moss (right) is pictured with her niece Shannon, who is now a third-year student at NC State, after her deployment to Afghanistan in 2007. In 2012, Nelson-Moss pitched the idea to honor veterans at NC State through a flag display.

“It taught me to be more extroverted,” she said. “It taught me how to be a leader and a better social worker, and I made some of the best friends I’ve ever had in my life that I still stay connected to.”

In 2008, Nelson-Moss started working at NC State. Since then, she has been an advocate for veterans at the university.

Early in her career at the university, Nelson-Moss served on a work group that studied how NC State could support veterans. From 2011 to 2015, she was an advisor for the Student Veterans Association.

In 2012, Nelson-Moss participated in a meeting about the Military Appreciation Day football game. During the meeting, she commended the university for giving free game tickets to ROTC members, but she advocated for NC State veterans to receive tickets, too. She also pitched the idea of honoring veterans through the flag display.

She said a flag display at the U.S. Army Airborne and Special Operations Museum in Fayetteville inspired her idea.

NC State’s first Salute to Veterans flag display, in 2012, was at Harris Field. Volunteers planted 858 flags in the ground for the inaugural flag display. The flags were on display for less than a week.

In 2013, volunteers moved the display to the Court of North Carolina, where the 1911 Building sits in the background, so the flags could be displayed in a more prominent site on campus. Since that year, flags have been displayed at the court for two weeks, giving more people a chance to see the patriotic display.

The group that comes together each year to put out the flags consists of first-time volunteers and those who consistently volunteer to help.

Nick Drake, director of Military and Veteran Services at NC State, has helped the past six years. When Drake started volunteering, the office he oversees didn’t exist, and he was working in Wellness and Recreation.

One of the reasons Drake got involved is because he’s a veteran. He served in the Army Reserve from 2000 to 2010 and re-enlisted in 2015 as a member of the North Carolina Army National Guard. After he re-enlisted, he went to officer candidate school and became a commissioned armor officer. Drake has served in operations Iraqi Freedom, Enduring Freedom and Spartan Shield.

“The flag display is becoming one of those annual things that people like to get involved with as a way to give back,” Drake said. “It’s their way to say, ‘Thank you.'”

The volunteers usually devote four to five hours — and sometimes up to eight hours — placing flags in the ground. As they push the flags into the grass-covered dirt, the volunteers get to know each other. The veterans exchange stories about when they served, and the volunteers who didn’t serve in the military curiously ask those who did about their experience.

“A lot of us, especially the veterans, like things to be done correctly and to look professional,” Nelson-Moss said. “Making sure things are in place and line up correctly is important to us. Of course, some of our student volunteers are engineers, and they pay attention to every detail.”