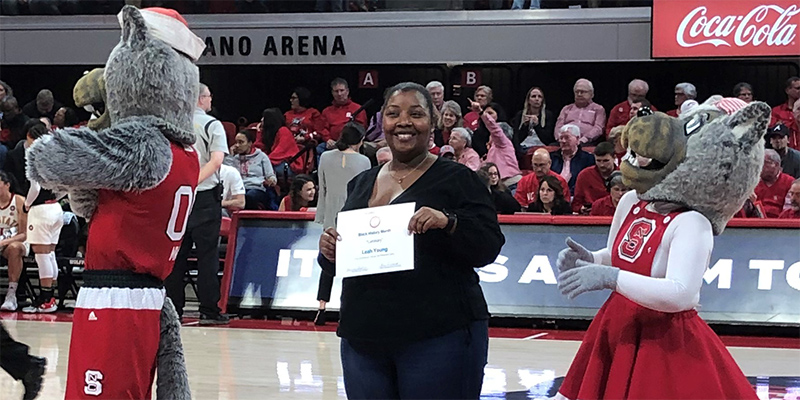 Leah Young is a dedicated advocate for black students at NC State University.

She advises them, encourages them and listens to their hopes, dreams and concerns.

When Toni Thorpe worked at NC State, she passionately supported black students, too.

For those reasons and others, Young and Thorpe were selected to be honored this month as part of NC State’s observance of Black History Month.

“It definitely feels really great to be recognized and for people to know that I genuinely do care, work really hard and am here to support students,” Young said.

Young works in NC State’s Multicultural Student Affairs office as the assistant director for student transition and success. She is an adviser for black student organizations and oversees several programs based in her office, including the Symposium for Multicultural Scholars. In June, Young will mark four years of service at NC State.

Young was recognized last week during a Black History Month celebration that was held during halftime at an NC State women’s basketball game.

Thorpe, who worked at NC State for 25 years, retired in January 2017. She is still well-known throughout the university by her endearing nickname: Mama Thorpe. Thorpe spent the last 16 years of her career at NC State’s African American Cultural Center as a program coordinator.

She promoted the center through its existing programs and new ones she helped create, such as the Red, White and Black Walk. The purpose of the walking tour was to highlight African American history at NC State.

Thorpe, who also served as an adviser to black student organizations, will be recognized during a Black History Month celebration that will be held Feb. 22 during halftime of a men’s basketball game.

“I was blessed to have so many meaningful relationships with students that I still cherish and hold close to my heart,” she said. “To me, I am the one who was honored, so to be honored is incredible.”

Young and Thorpe were selected to be honored after the Office of Equity and Institutional Diversity solicited nominations for people who have supported or enhanced NC State’s black community.

OIED asked for nominations in two categories: legend and luminary.

Eleven nominees were submitted for consideration. The nominees were nominated for various reasons, including their support for marginalized communities and student empowerment as well as their resilience, strength and ingenuity.

NC State students Iwinosa Idahor and Taleek Harlee led the effort to select the honorees. They solicited input from a student Black History Month Committee before selecting Young as the luminary and Thorpe as the legend.

“I was very moved by the depth of the nominations,” Idahor said. “They were thoughtfully written.”

Young and Thorpe became advocates for black students at NC State for the same reason: their experiences as African American students at predominantly white universities.

“Many years later at NC State I came across some students having similar experiences as I did,” she said. “I wanted to engage them and do whatever I could to make sure they grew from the experience and graduated.”

Young attended James Madison University in Virginia. She said her career goal when she enrolled at the school was to become a lawyer. But while at James Madison, Young helped with efforts to recruit and retain students of color. Young said that experience motivated her to take a different career path.

Young said by the time she enrolled in graduate school at Old Dominion University, she knew she wanted to pursue a career that involved working with students of color.

“It’s hard sometimes to show up in spaces where people don’t look like you or where you experience adversity or racism,” Young said. “It feels great to be able to support someone and say, ‘You can do this. You are going to make it.'”