When Patricia Sajecki’s phone rings in her office, her story of surviving breast cancer might be just what the person on the other end of the line needs to hear.

Sajecki is a leave consultant in University Human Resources at NC State. When employees need significant time off for health reasons, they call Sajecki. 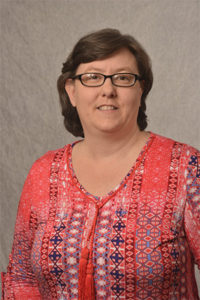 She shows empathy for them and tells them about voluntary shared leave, a program that allows employees to donate leave to co-workers dealing with health crises.

But some days when Sajecki’s phone rings, she relives the worst of her battle with breast cancer as a way to encourage the person calling to do what she did: survive.

“When you hear it from somebody who’s already been through it, it kind of makes you feel like you can believe it,” she said. “That’s why if somebody calls and tells me that they’re going to be starting cancer treatments, I tell them what I’ve been through.”

Awareness campaigns encourage women to get breast cancer screenings and do self-exams, and they stress the importance of early detection.

Breast cancer is the second leading cause of death for women. In the U.S. each year, about 245,000 cases of breast cancer are diagnosed in women, and about 41,000 women die from the disease, according to the Centers for Disease Control and Prevention. 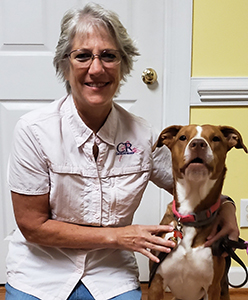 Karen Mitchell and her dog Ziva

“I am proud of the fact that I have done well — that I survived it,” said Karen Mitchell, a human resources specialist in the College of Veterinary Medicine. “I hope that inspires someone else and lets them know, ‘OK, there is hope.’ You don’t have to give up when you get that diagnosis.”

Mitchell said she has tried to maintain a don’t-give-up attitude since her diagnosis in 2010.

“My husband was with me when I went in to see the doctor,” she said. “After he told us, we went back to the car. We both sat and cried, and then we said, ‘It is what it is. We will get it taken care of, and we’ll be fine.’”

Mitchell said she opted for a mastectomy, followed by reconstructive breast surgery. She said she’d hoped to avoid chemotherapy, but unfortunately, she ended up needing it.

“So we went to the car and we cried again, because that’s not what I was expecting,” she said.

Mitchell began her chemotherapy treatments the week of Christmas 2010. Her last treatment was in March 2011.

“I consider myself extremely lucky, because I don’t think I went through half of what other people have gone through,” she said. “I just don’t find that I need to complain about it.”

In 2014, two weeks after Sajecki started working at UHR, she was diagnosed with breast cancer.

Sajecki said her emotions were mixed as she processed her doctor’s words that day. She said she was relieved to learn what the lump was in her breast; but as a new employee, Sajecki feared losing her job. Of course, she didn’t.

Instead, her boss and co-workers became beacons of support. Her family did, too.

Sajecki’s doctor mapped out a treatment plan: chemotherapy first, then surgery, followed by radiation treatments. She did all three over a seven-month period after her diagnosis.

Those months were overwhelming, Sajecki said. She experienced nosebleeds and hair loss. The day she decided to cut off the remainder of her hair and pick out a wig was emotional for her.

Then in June 2015, Sajecki heard the words every cancer patient wants to hear: You’re cancer free.

“Overall, I’m enjoying life,” she said. “I live every moment for the moment because you never know what life’s going to bring you.”